There are a number of things that occur naturally in our environment that can alter the attraction we feel for people. These things can seem small, but if a number of them add up (as they often do) they can make a huge impact on the way we feel about someone on first meeting them. Since these elements are so common, we’ve outlined the most important in this mini series so you can use them to your advantage to make a great first impression. A better understanding of these things will also help you and your friends avoid situations where your perceptions of others will be adversely impacted.


The first, most basic was called the ‘mere exposure effect’ by social psychologist Robert Zajonc. We’ll call it the Familiarity Principle. Basically, the more we see people, the more we like them. This is sometimes considered the very basic principle of attraction. An evidenced account of this effect was well described by two authors named Moreland and Beach in 1992. They got four confederates (people in on the experiment) and enrolled them in a University class. Each one attended a different number of classes. One went to none, one went to five lectures, one to ten and the last confederate went to fifteen classes. None however, interacted with the class. At the end of the unit, the students in the class were shown slides of the confederates and were asked to rate their attractiveness. The more often the confederates attended class, the more attractive they were perceived by the students. Obviously though, there is a line. If someone starts to creep around, hanging out the front of our house or standing so close we can feel their breath, we’re more likely to freak out. But if we happen to catch the same bus every day, or maybe we stand close to them in the coffee line before work, we will start to like them more.

The first explanation for this is the simplest.

Other explanations are more complex, but still make a lot of sense.

All of these things make even more sense when consider that this reaction might be an environmental throwback to a time when ‘community’ was about survival. That this response is there to help us build a greater sense of community with those close to us.
We can obviously use this to our advantage. If you want a better chance of getting that promotion, be seen around the building more often. If you want to bring someone in to your social circle, call them; hang out with them more often. If you like that guy or girl, sit at the table closest to them at the cafe or bar. Make sure you remember though, there is a line. Get too close when it’s not reasonable and people will get uncomfortable and maybe even upset. Also, if someone sees you all the time, all of a sudden, they’ll pick up on it. There are only two reasons I’ve started to see someone everywhere I go, one marks the advent of a new stalker and the other was because the person was figuring out the best way to mug me.
Make sure you check out the other members of this miniseries here and here. Or maybe you’d like to know three completely random things that will boost your attractiveness? Giving you the dirt on your search for understanding, psychological freedom and ‘the good life’ at The Dirt Psychology. 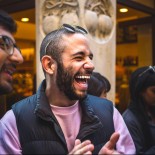